A Florida Target store was the site of a vocal anti-mask parade in defiance of Broward County law, USA Today reported. The group of about 15 marchers without masks is connected to an earlier July 4 beach protest. The Target event attracted national attention in a viral video that used the Twisted Sister 1984 hit "We're Not Gonna Take It." Twisted Sister band leader Dee Snider (@deesnider) responded to a viral video of the parade by tweeting: “No...these selfish assholes do not have my permission or blessing to use my song for their moronic cause. #cuttheshit.” 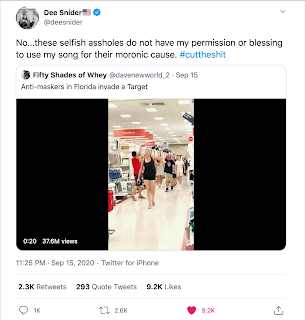 The Miami Herald called the event a “flash mob storm,” and counted 10 to 15 protesters. The event was planned earlier in the week and promoted on social media channels, as some complained about store rules requiring customers to wear masks as a way to limit the spread of Covid-19. A Target spokesperson told Fox Business that, “We’re aware of the group of guests who came into the store… and we asked them to leave after they removed their masks and became disruptive and rude to other shoppers.”

Broward County officials enforced a mask law by fining Target and issuing $100 fines to the protesters for not wearing masks in a public space, the South Florida Sun Sentinel reported. Florida counties passed various laws during the pandemic. In this county, facial coverings were required in all public spaces outside of private homes. Civil and criminal charges included fines up to $1,000, or $15,000 for “intentional and irreparable violations.” A business could be forced to close for 24 hours.

“Our priority remains the health and safety of our team and guests,” Target Spokeswoman Danielle Schumann said. Target complied with the law by asking protesters to leave “after they removed their masks and became disruptive and rude to other shoppers.”

As a free speech issue, the protesters could have chosen to select a public park or street for their protest, but they still would have been in violation of Florida law by not wearing a mask. Organizers suggested that they were exercising their First Amendment rights to speak out against the public policies.


Question: Given the thousands of deaths caused by the spread of Covid-19, did Target corporate headquarters miss an ethical moment to speak out in favor of facts and science?